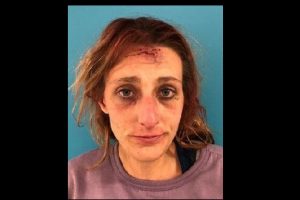 Jamestown, CA – A female that resisted arrested wound up in a restraining device, after injuring herself and a deputy.

Tuolumne County Sheriff’s Deputies found the woman walking in the middle of Snell Road in Jamestown throwing objects at passing vehicles recently. The woman was identified as 24-year-old Brooke Stevenson of Jamestown, who had an outstanding misdemeanor arrest warrant. As the deputy attempted to put handcuffs on Stevenson, she resisted by trying to escape and kicking the deputy.

The deputy was eventually able to click the handcuffs on Stevenson, but not before she sustained minor injuries to her face and the deputy got a cut to his forehead. Sheriff’s officials say Stevenson continued to struggle and for her own safety and the deputy’s, she was strapped into what is called a WRAP restraining device. They described it as “a cloth restraint system which places a person in an upright, seated position while preventing movement of the legs.”

Stevenson was placed on a $20,000 bail for resisting an officer resulting in injury and her warrant.