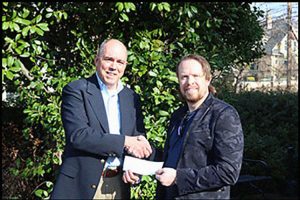 Sonora, CA — The YES Partnership received a significant donation to educate Tuolumne county youth about the harmful effects of cannabis and other substance abuse. The donation will launch the “Be Smart, Stay Smart, Just Say No To Marijuana” campaign.

The YES Partnership states the donation was from Mel Kirk, brother of Tuolumne County District 3 Supervisor Anaiah Kirk. He donated the $10,000 in response to the City of Sonora’s passage of the recreational marijuana sales ordinance stating he felt it was the most effective way he could help mitigate the potential negative impacts of the ordinance on children. Kirk states, “[Marijuana] is permanently damaging their brains and their ability to think. Brain development continues until age 25 and drug use prior to that time has negative consequences.”

The YES Partnership, now in its 35th year, is a community-wide coalition dedicated to supporting Tuolumne County youth and families by preventing suicide, substance, and child abuse. In response to the donation, the YES Partnership has formed a Cannabis Education Committee. YES Partnership Director, Bob White says, “I am very grateful to Mel Kirk for his generous donation to further enhance our youth cannabis prevention efforts.”

The Partnership has been providing marijuana prevention education to youth in the schools for the past four years.  They also have a grant for Alcohol and Drug Primary Prevention Services from the Tuolumne County Behavioral Health Department to focus on youth marijuana prevention. Their efforts have included supporting The Drug Store Project sponsored by the Tuolumne County Superintendent of Schools Office, promotion of the Let’s Talk Cannabis program sponsored by the California Department of Public Health, and the establishment of the EPIC Youth Coalition.

The YES Partnership shares that Kirk suffered a loss of a family member due to substance abuse. “Kirk wants kids to understand the dangers involved, it’s not just cannabis use that has Kirk worried.”

Kirk says, “We already have a problem in this county with kids using marijuana, and often, marijuana use leads to other types of substance use. My cousin Kaelin passed away from a heroin overdose at the age of 29. Kaelin started smoking marijuana at the age of 14 with his friends, and this was the gateway to a lifelong drug abuse problem. He always credited early marijuana use as the thing that led him to the choice of using heroin.”

To learn more about the effects of cannabis, and the YES Partnership’s local education and prevention efforts, visit YESPartnership.net