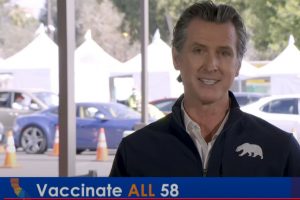 Sacramento, CA — California Gov. Gavin Newsom believes the entire state might be out of the most restrictive COVID-19 purple tier this spring and touted a new spending deal to help individuals and businesses.

Regarding when the entire state could be out of the purple tier by the first day of spring, Newsom replied at the press briefing, “Yes, based on trend lines.”

Those trends include the state’s 7-day test positivity rate now at 3.5% down from 11.4% a month ago. Also, hospitalizations and deaths rates continue to decline and the rate of people spreading the virus to others is now at its lowest in months, according to Newsom.

The governor stressed that more counties will soon be allowed to move from the purple tier to the red tier of the state’s color-coded reopening system that includes indoor services at 25% capacity for some businesses like dining, explaining, “I anticipate a substantial number next week and even more in the subsequent weeks. So, if the trend lines continue then I think indeed that is the case.” He added that movie theaters, museums and gyms will open with limits as well.

A half dozen rural counties in Northern California and along the Sierra Nevada are already in the red or orange tier with Plumas County being added to the red tier today. In the Mother Lode, Mariposa is also in the tier and Alpine has made it to the least restrictive “yellow” tier, as shown in the map below:

At least five small counties are moving toward the red tier, but the state did not specify which ones and noted that the more populous counties will take longer to switch tiers.

The governor announced today that he and lawmakers reached a $9.6 billion spending deal on small business, nonprofits and cultural center grants of $5,000 to $25,000, a one-time stimulus checks of $600 for low-income individuals and housing for farmworkers infected by the coronavirus, click here for more details.

“From childcare, relief for small business owners, direct cash support to individuals, financial aid for community college students and more, these actions are critical for millions of Californians who embody the resilience of the California spirit,” stated Newsom while at a community vaccination clinic in the Coachella Valley.

California has now administered more than 6 million vaccines, and the state is in the process of shifting to a new distribution system run by insurer Blue Shield, limiting counties’ decision-making power.