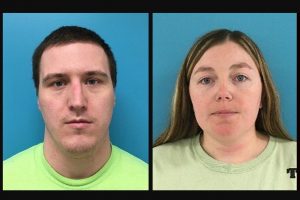 Sonora, CA — We reported yesterday that 26-year-old Joseph Maloney was arrested in connection to the death of one-year-old Koltyn Blackwood.

The young boy was in the care of Maloney when he passed away in January of 2019. Maloney is being held on $1-million bail for “second-degree murder” and “assault on a child causing death.” Maloney was arrested at his home in Sonora yesterday.

An arrest warrant was also issued for the boy’s mother, 23-year-old Nicole Sparks.

Sonora Police Chief Turu Vanderwiel reports that Starks turned herself in this morning. He adds that the PD, District Attorney’s Office, and Koltyn’s family will not be commenting further on the case. She is charged with “child abuse under circumstances likely to cause great bodily injury or death,” with a bail of $25,000.

Yesterday Koltyn’s family released the following statement: “We would like to thank everyone that put in countless hours of hard work to make this arrest. Especially the Sonora Police Department and the District Attorney’s Office. We would also like to thank all of the reporters that helped keep us going over the past two years. Now we can move forward and concentrate on Koltyn’s Law.”