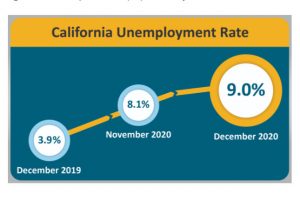 Sonora, CA – The unemployment rate inched up for both the state and the Mother Lode at the end of last year.

California’s unemployment rate edged up nearly 1percentage point, from 8.1% in November to 9% in December of 2020. Last month the state shed more than 52,000 jobs led by the COVID-19 pandemic-hobbled restaurant and lodging industries, according to the Employment Development Department (EDD). In its monthly unemployment reported released Friday,  this is the state’s first monthly rate increase since April.

Imperial County had the highest jobless rate at 17.7% and Marin had the lowest at 5.5%. The state has recouped 44% of the 2.6 million nonfarm jobs lost at the start of the pandemic in March and April compared with 55.6% nationwide. The largest job gains at the end of last year were in construction at 31,600. The biggest loser was leisure and hospitality with 117,000 jobs lost.

The U.S. unemployment rate was unchanged from November remaining at 6.7%.