Newsom Signals Era Of Lawsuits Ends Between CA And Feds 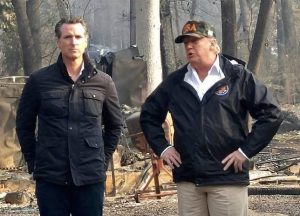 Sacramento, CA — With the inauguration of President Joe Biden and Vice President Kamala Harris, Governor Gavin Newsom says there will be a new working relationship between the state and the federal government.

Back and forth lawsuits between the Newsom and Trump administrations have been a common trend over the past four years as both sides have tried to use the legal system to slow the actions of the other. The federal government has challenged California’s efforts on things like greenhouse gas restrictions, and the state has tried to resist federal policies related to things like immigration.

Newsom states, “We’ve been involved in over 100 lawsuits with the Trump Administration. Clean air, clean water, clean cars, issues related to health, and immigration…now, all of those headwinds are going to be tailwinds.”

California’s Attorney General, Xavier Becerra, decided to file nine new lawsuits against the Trump Administration during the President’s final full day in office on Tuesday. They were related to things like the Endangered Species Act and greenhouse gas emissions.

Newsom says the state will likely be forging new partnerships with the federal government over the coming four years related to several issues.