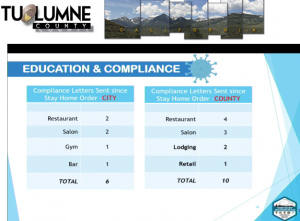 The county takes an education approach after receiving concerns from the public about COVID-19 business violations, and the division has sent out compliance letters to 10 businesses in the unincorporated areas, and six businesses within the City of Sonora, since the start of the recent Stay At Home order. The goal is to encourage compliance.

Earlier the program was funded by federal CARES Act dollars, but since the start of the new year, the county is funding it with contingency money. The current plan has been to continue the program through the end of February, at a cost of $10,000 per month, and then reassess.

District Three Supervisor Anaiah Kirk voiced concerns that even though the county is taking an educational approach, the information is still being sent to state agencies, who could take actions against businesses.

Of note, the Sonora City Council did pass a mechanism for fines if violators disobey directives, but the county supervisors do not have anything for the unincorporated regions. It was noted that many downtown Sonora businesses have recently decided to defy the state’s directives in order to keep afloat.

Board Chair Ryan Campbell stated that during the early stages the shutdown was very “complex,” and businesses needed the educational tools. However, he says, “It seems that businesses that are not wanting to comply have made a decision to operate the way they want to operate…it is kind of a diminishing return on what can be done.”

Supervisor Kathleen Haff praised the work of the division, but said if the county is not funded by the state to continue the education and compliance work, they should no longer continue it.

Supervisor Jaron Brandon echoed the comments, adding, “There is a difference between saying we don’t want to work with the state and saying that we need the resources to do what they are asking us to do during this unprecedented crisis.”

The discussion of whether to end the division came up during a more general COVID-19 update agenda item.  The board directed CAO Tracie Riggs to formally bring the issue back (ending the division) at a meeting next month.

Riggs noted that there are questions that need be looked into regarding some other realignment related funds, and whether dropping the division would impact them, and those issued will be investigated.