Smoky Skies Over Yosemite Possible For Next Couple Of Weeks 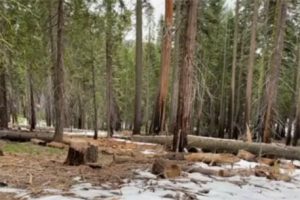 Yosemite, CA – Smoke will be visible in the Crane Flat area of Yosemite National Park next week due to a prescribed burn to take place over about five days, but the smoke may linger for up to two weeks.

Park fire crews are preparing to set ablaze 20-acres near Crane Flat Lookout along the Helibase access road and Garnett Ridge Road adjacent to the Merced Grove. Ignition is planned for Wednesday, January 20th, depending on favorable weather and smoke dispersion conditions. The burn could last four to five days with smoke lingering in the area for one to two weeks, relay park officials, who added that the smoke will remain in that area during the day but is likely to drift down canyon at night.

Deputy Fire Management Officer Kelly Singer detailed the burn, describing, “Crews will be ‘jackpotting’ [burning heavy concentration of fuel] to reduce fuel loading along the access road to the Crane Flat Helibase and Garnett Ridge. This project will provide for ease of control when other segments are burned in the future.”

This project is part of the Crane Flat Prescribed Burn that encompasses 1,126 acres north of Big Oak Flat Road.