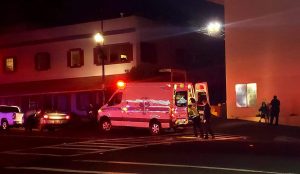 Sonora, CA – Two pedestrians were injured last night in downtown Sonora after being hit by a car with a drunk driver behind the wheel, according to police.

The woman and a man were crossing Washington Street/Highway 49 at the Gold Street intersection just before 7 p.m. when a 2005 Dodge Neon struck them. Officers responding to the scene found the woman lying in the middle of the crosswalk being treated by fire and medical personnel while the male was sitting on the curb.

The driver of the car, 41-year-old Shawn Harris of Sonora, had pulled over and was standing by his vehicle. When officers started to question him, they “could smell an odor of an alcoholic beverage coming from his person,” police disclosed. A field sobriety test was done, and Harris was taken into custody for felony DUI.

A search of Harris’ car turned up suspected drugs and paraphernalia, which tacked on narcotics possession charges. The type of drug has not been released.

The woman was taken by ambulance to Adventist Health Sonora suffering five broken ribs and a fractured upper left arm as detailed by police. The man complained of pain and sustained minor injuries. Harris’ bail was set at $25,000.