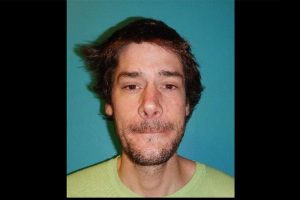 Sonora, CA – Sonora area residents were startled to find a stranger on their property that began to threaten them and then frightened when they found out he had a deadly weapon on him.

A report of a trespasser refusing to leave a property on Mono Vista Road North in the Mono Vista area, off Highway 108, recently sent Tuolumne County Sheriff’s Deputies responding to the scene. Immediately, deputies were able to detain the suspect, 29-year-old Travis Madden of Sierra Village, while gathering information from the homeowners and other witnesses.

Deputies learned that Madden was caught wandering the property and confronted by the owners who stated they did not know Madden. They recounted that after several requests were made for him to leave, Madden began reaching into his backpack while making threats to harm them.

Luckily, deputies arrived before the situation turned physical. Inquiries by Clarke Broadcasting to sheriff’s officials regarding what was found inside Madden’s backpack revealed one of the items was a hatchet. Madden was arrested for making criminal threats with intent to terrorize and placed on a $20,000 bond.