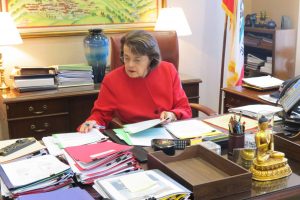 Washington, DC — Senator Dianne Feinstein authored a bill approved by Congress that would have gradually phased out the use of large-mesh drift grillnets used to catch fish along federal waters off the coast of California.

The bill was co-authored by Feinstein, a Democrat, and Republican Shelley Moore Capito of West Virginia. In his veto message, President Trump stated that it would negatively increase the reliance on imported seafood and worsen a multibillion-dollar seafood trade deficit. He also argued it “will not achieve its purported conservation benefits.”

Feinstein was discouraged by the action and said the move has “ensured that more whales, dolphins, sea turtles and other marine species will be needlessly killed, even as we have a proven alternative available.”

The Associated Press reports that it is illegal to use the nets in U.S. territorial waters of the Atlantic Ocean and the Gulf of Mexico, and off the coasts of Washington state, Oregon, Alaska and Hawaii. They remain legal in federal waters off California’s coast.

The bill would have phased out the use of the nets over five years.

Trump said the regulations already in place for fisheries are stricter than many foreign countries.

Feinstein said she plans to reintroduce the bill when President-Elect Joe Biden takes office on January 20.