A Look At Reservoir Levels Across State 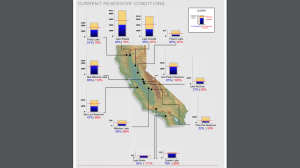 Sonora, CA — Despite a meager snowpack thus far, the water levels are still relatively strong for the local reservoirs in the region.

The levels are lower at many reservoirs to the north and south of the Mother Lode. Click on the image to see how different reservoirs are faring across the state.

The snowpack for this time of year (52-percent) is the lowest it has been since 2017, according to the California Department of Water Resources. The US Drought Monitor, a weekly federal report, states that 95-percent of the state is currently in a “moderate” state of drought.