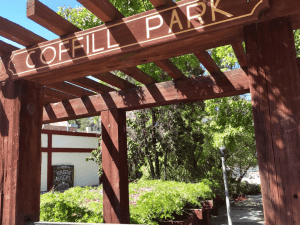 Sonora, CA – The name of a male found deceased in Coffill Park in downtown Sonora earlier this month has been released.

The man has been identified as 61-year-old Tony Guy Wallace of Sonora. As first reported here by Clarke Broadcasting, a call came into the Tuolumne County Sheriff’s dispatch relaying that a “male lying against a wall and not moving,” in the park located along South Washington Street/Highway 49, between Theall and Linoberg streets the evening of Monday, December 7th.

While an autopsy was performed, a toxicology report is still out, so the cause of death remains unknown, according to Sheriff’s spokesperson Nicco Sandelin. That office also serves as the county coroner’s office. Sandelin adds that there were no indications of foul play at the scene.

At the time the man’s body was found, Sonora Police indicated Wallace’s death was probably the result of a medical issue. It remains unclear whether drugs or alcohol played a role in his death as well.