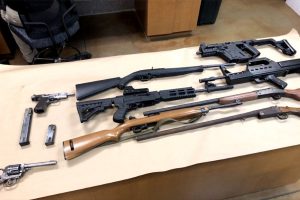 Guns found in the raid of San Andreas home

San Andreas, CA – A discarded ankle monitor left at a San Andreas home led to the discovery of stolen items, a suspected meth lab, guns, ammunition, and sadly a minor child who was removed from the residence.

Their arrest comes after an extensive investigation by the Calaveras Sheriff’s Office and the probation department. The investigation began on Dec. 2nd when a business in Angels Camp was burglarized. At the scene, deputies discovered that the thieves had taken nearly 1,500 pounds of copper wire and about $3,000 worth of tools.

Three days later, by chance, a deputy recognized 34-year-old Zachary Anglin of Avery at a gas station in San Andreas around 2 a.m. Knowing that Anglin was on searchable probation, a pat-down was done uncovering methamphetamine and that he was not wearing his ankle monitor. Anglin was arrested and that information made it to the probation department a couple of days later.

Detectives tracked Anglin’s ankle monitor to a home in the 3000 block of Highway 49 in San Andreas. When deputies went to retrieve it, they noticed several bins full of industrial copper wire, which was later determined to be connected to the Angels Camp burglary.

Sheriff’s spokesperson Sgt. Steve Stark recounts, “Anglin stopped by the house to visit, left some stuff there, went to the gas station and got arrested. Had he not been arrested, and the deputies go to the house to retrieve the ankle monitor that he left. It would be unlikely that we would have found the wire and the dangerous illegal weapons and the drugs.”

With a search warrant in hand, on December 11, another raid was made on the home. This time firearms and ammunition that sheriff’s officials say were illegally possessed were found. They included
a fully automatic .45 caliber machine pistol, and another prohibited weapon that was not revealed.

In an outbuilding behind the house, there were numerous bottles with powder in them and preliminary tests found methamphetamine and amphetamine to be present. Also located, was over 1000 rounds of ammunition, more than19 grams of suspected methamphetamine, numerous used hypodermic needles, and suspected heroin.

Stark adds that Child Protective Services was called in to remove a 4- to 7-year-old boy from the residence. Additionally, Calaveras County Code Compliance responded to investigate hazardous electrical issues, unpermitted structures, and debris.

Arrested at the home were Ki Purvis and Paige Vidak both 35 and residents of the home. Purvis was placed on $125,000 bail and Vidak $150,000 due to an additional charge of child endangerment to include bodily injury or death. Anglin is being held without bail.