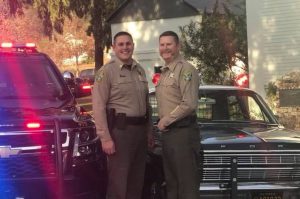 Mariposa, CA — Two years ahead of his term expiring in 2022, Mariposa County’s Sheriff, Doug Binnewies, will be retiring.

Binnewies says it is a difficult decision, as it will conclude a thirty-year career with the sheriff’s office. He said at the board of supervisors meeting, “After much discussion with my family, I have made the decision to retire as your elected sheriff-coroner at the end of this year. But I can assure you that the Mariposa County Sheriff’s Office is ready to promote new leaders to maintain and carry on the professional service that our sheriff’s office is well known for.”

Binnewies indicated that he has had conversations with some county supervisors and department heads about his decision, and he is now making it public.

He will officially be recognized by the supervisors at the meeting on December 22, and his last day will be December 28.

Binnewies has been involved in the response to many high profile fires in recent years, including the 81,000 acre Detwiler Fire in 2017, and the Rim Fire in 2013 that burned in Tuolumne and Mariposa counties, in addition to various high profile criminal investigations.

Binnewies says he is recommending the board of supervisors select Undersheriff Jeremy Briese to finish out the remaining two years of his term.