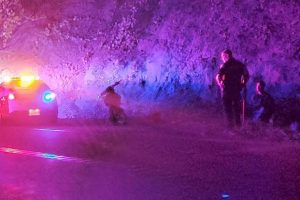 West Point, CA – A dirt bike chase in West Point ended when the rider jumped off the motorcycle and took off running but he did not get far.

A motorcycle with no license plate or proper lighting equipment to make it street legal caught the eye of a Calaveras Sheriff’s Deputy patrolling near the intersection of Highway 26 and Snead Road. While attempted to initiate a traffic stop, the rider took off.

Sgt. Greg Stark details the pursuit, “It was 2.7 miles and lasted about four minutes. The chase was just over 50 mph, which in that area with the extremely windy roads is extremely unsafe.”

Just north of the Amador/ Calaveras County line the rider dropped the bike and headed off on foot. Deputies were able to run him down after only about 40 yards. He was identified as 31-year-old Matthew Keith Wade of Pioneer. Sgt. Stark says when asked why he fled he replied that the “motorcycle belonged to a friend and he did not want it to be towed.” Instead, now Wade faces possible charges of evading police, driving with a suspended license and resisting arrest.

Calaveras Sheriff’s officials note that the deputies involved in the chase are part of the Calaveras County Special Enforcement Team (SET). The unit was formed to heighten police presence and conduct extra enforcement in areas where crime is on the rise and to utilize community-oriented policing strategies. They further explain that having a team specifically able to follow up in high crime areas or in areas with trending crime patterns is very beneficial to the safety of Calaveras County.