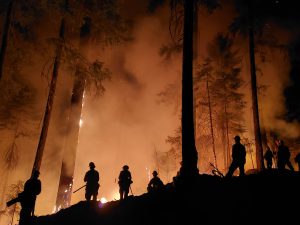 Sacramento, CA — Five of the 10 largest wildfires in the state’s recorded history have occurred since the beginning of August.

We reported earlier that 2020 has unfortunately been a record-breaking fire season in the state, as over 4-million acres have burned. Previously, the record was 1.6-million acres, occurring two years ago.

Another unfortunate milestone was set yesterday, as the largest fire in the state’s recorded history, the August Complex incident, surpassed 1-million acres. It was a series of lightning-caused fires that formed into one in early August along the Coast Range between San Francisco and the Oregon border.

Governor Gavin Newsom stated yesterday that the amount of land burned by that one fire is larger than all recorded fires between 1932-1999.

8,700 structures have been destroyed in the state by fire this year, and 31 people have died.