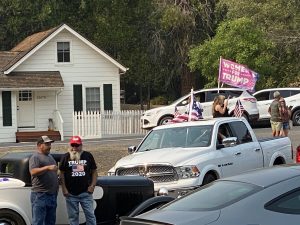 Sonora, CA — A caravan of cars and trucks traveled through Tuolumne County on Saturday afternoon, honking horns, and cheering, in support of President Donald Trump.

Curious about how the idea of the parade got started, Clarke Broadcasting reached out to Randy Hanvelt, Chair of the Tuolumne County Republican Central Committee, who says it was initiated by a local resident on social media and the idea took off organically, with an estimated 500 vehicles traveling along the route. Most were flying President Trump flags, or American flags.

It started at Columbia State Historic Park with the singing of the National Anthem by Ali Borja, and it then went to Jamestown, Tuolumne, Twain Harte, Soulsbyville and downtown Sonora. The CHP helped out with traffic control. It took about 35 minutes just to move all of the vehicles out of the parking lot in Columbia. Many spots along the route had people standing along the side of the road, cheering, and waiving flags.

Officers with the Sonora Police Department also assisted with traffic once the parade arrived downtown. Police Chief Turu Vanderwiel says, “We learned of this on social media and ultimately the organizers reached out to us and advised us of their intent.  There was no indication of significant counter-protests or unsafe conditions so we just asked the organizers to discourage participants from impeding traffic or obstructing intersections. We also asked that they encourage participants to observe the states guidelines regarding outdoor demonstrations. There was a small police presence to monitor traffic and watch for unsafe activities.”

The parade/rally was held ahead of the November 3 election. Click on the image box to view some photos.