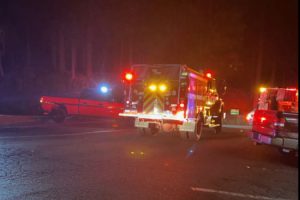 Twain Harte, CA – A  motorcycle versus pickup truck crash last night in Twain Hart ended with the bike then smashing into another vehicle.

The crash happened around 8:30 p.m. on Twain Harte Drive at the Meadow Lane intersection by the Twain Harte arch. It is unclear how the motorcycle and pickup collided. The CHP reports after the collision the Harley Davidson motorcycle smashed into another parked pickup.

The driver suffered major injuries and had to be flown from the scene to a Modesto hospital. The bike was a total loss. The wreck remains under investigation, according to the CHP.

A special thank you to our community partner David Robinson for sending in a picture.