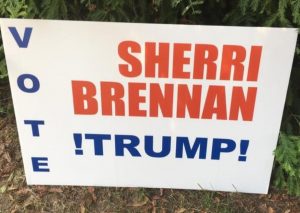 Sonora, CA — Outgoing Tuolumne County Supervisor Sherri Brennan is concerned that someone is putting up campaign signs with her name on them around Sonora.

The signs, spotted around her District One yesterday, read, “Vote Sherri Brennan” and “Trump.” Brennan suspended her campaign on August 18 and confirms she is no longer seeking the seat. Her name will still appear on the ballot in November, along with the top vote-getter from the March primary, David Goldemberg. We reported earlier that a write-in candidate is also actively campaigning for the seat, Cody Ritts.

It is unclear who is behind the signs, but Brennan’s former campaign manager, Stacey Dodge, wants to make it clear that Brennan is not seeking votes.

She has put out a statement on behalf of Brennan’s campaign, stating, “These signs look like a deliberate attempt to confuse and mislead voters. This unethical tampering with an election, borders on criminal. The Election’s Office, the District Attorney’s Office and the FPPC have all been notified.”

Many other candidates for local races have reported having signs stolen or damaged this election season. Vote by mail ballots go out next week, and the election is November 3.