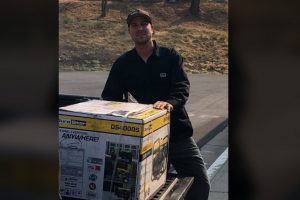 Update at 7:10 p.m.:  Hours after finding out their much-needed generator in case of further PG&E power shutoffs had been stolen, Meals On Wheel CEO Kristi Conforti tells Clarke Broadcasting that she was shocked when she got the news a new one had been donated. The good samaritan was local resident Jake Fuller who generously donated a brand new 4000-watt generator.

Thieves stole the generator by cutting through a fence outside the Sonora Senior Center building on Greenlee Road in the early morning hours on Thursday. Besides the nearly $1,000 price tag to replace it, the loss would also have interrupted the service of hot meals to the around 370 seniors that depend on the program if a PSPS took place. Upon hearing of the theft, Fuller bought not only the generator but all the accessories that go with it, as pictured in the image box. Conforti final thoughts on the experience, “We started out the day sad and angry for the missing generator. Then we ended the day happy and thankful and grateful. We just feel like, for every thief, there’s a hero!”

Further details on the theft are below.

Original post at 4 p.m.: Sonora, CA – In the dark of night, thieves made off with a generator from the Meals On Wheels program, leaving them high and dry if there is another PG&E power shutoff.

Meals On Wheels CEO Kristi Conforti recounts to Clarke Broadcasting that around 5:30 a.m. kitchen staff arrived to discover its Troy Bilt 5500-Watt generator at the Sonora Senior Center building on Greenlee Road had been stolen. It was inside a fenced-off area of the truck loading dock. Conforti details, “There was a tarp over the fencing, but it was in sort of a position that looked suspicious, so she pulled it back, and sure enough there was a big hole in there [the fence} and the generator was gone.”

It is a heavy generator and Conforti believes it would have taken at least two people to lift it. Even worst she adds, “The generator wasn’t even ours. We had it on loan from Sonora Sunrise Rotary. It was $840 but with the gas can and electrical cord, it was close to a thousand dollars with everything.”

The generator was to make sure food delivery did not get interrupted if there was another PG&E Public Safety Power Shutoff (PSPS). The generator was used to operate the meal packaging system, the ice machine, and some lights. Conforti explains that it will impact their ability to seal hot meals and to deliver cold milk in ice chests during a power outage. She has this message for the thieves, “I just want them to understand that they are taking the food out of senior mouths.”

The charity serves hot meals to about 370 seniors a week. That comes out to about 1,500 meals a week. Conforti says with the COVID-19 pandemic they are now serving two meals a day, doubling that number to 3,000. She adds, “It’s just unfortunate that somebody felt the need to steal from a senior meal program that is a non-profit and doesn’t have unlimited funds.”

A picture of the generator is in the image box and its model number is 030446 with serial number 1017205596. Conforti shares, “We’re assuming that somebody is going to try to sell this. If anyone sees it out there, we encourage them to call the Sonora Police Department.”