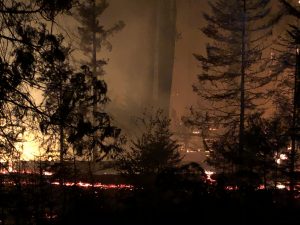 Madera County, CA — A fire that ignited on September 4 in Fresno County, and is causing occasional poor air quality in the Mother Lode, has now consumed 304,604 acres.

The Creek Fire is 39-percent contained. Last week the incident command team indicated that the goal was to have full containment by October 15, but the date has now been pushed to October 31.

An estimated 4,576 structures are still threatened, and 855 have been destroyed. There have been no injuries. Most of the recent fire activity has been in Madera County, as firefighters are challenged by large pockets of heavy fuel, including dead and dying trees. Temperatures are expected to increase over the coming days which could lead to more smoke in that area.

3,263 firefighters are assigned to the incident, including 418 engines, 78 water tenders and 18 helicopters.

The Creek Fire is now the 6th largest fire in the state’s recorded history. The cause of the blaze remains under investigation.