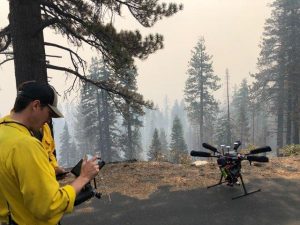 It is now 50-percent contained. Thankfully, Yosemite officials report, “Activity has diminished substantially due to cooler weather conditions and smoke inversion in the area. Primary direction of growth is to the north and northwest from Tioga Road at McSwain Summit.”

Officials had been using a drone to map and gather data regarding the fire because it was too difficult to access the fire on foot. The drone is no longer in use as the fire activity has declined.

The Blue Jay Fire is four miles south of the White Wolf Campground at an elevation of 9,000 feet.

Meanwhile, the nearby Wolf Fire, a mile north of White Wolf Campground, is 1,087 acres and 35-percent contained. The fire is still burning in dense pockets of vegetation and accumulated dead and down logs.

Both fires were ignited by lightning strikes.