Borgeas And Others React To Newsom’s 2035 Vehicle Executive Order 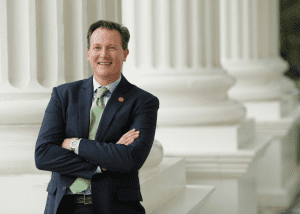 Sacramento, CA — The reactions are mixed, primarily along party lines, regarding Governor Gavin Newsom’s executive order to end the sale of new gas-powered cars by 2035.

Mother Lode District 8 Republican Senator Andreas Borgeas, says, “The Governor’s announcement to eliminate gas-powered vehicles by 2035 does not address California’s most pressing needs. The State is struggling with historic wildfires, businesses shuttered, people out of work, a housing crisis and the pandemic, yet the Governor is more concerned about advancing a radical agenda than tackling relevant issues that affect all Californians. With virtually no infrastructure to support the wholistic eradication of gas vehicles, and the threat of rolling electrical blackouts, the Governor has unilaterally decided to move forward without consultation from the Legislature. Governor, focus on forest management, CEQA reform and getting our economy back on track.”

Meanwhile, California US Senator Diane Feinstein endorses the executive order, stating, “This is a tremendous goal that will have a lasting effect across the auto industry, even beyond California’s borders and the nearly 2 million personal vehicles sold in the state annually. Cars and trucks account for nearly one-fifth of all emissions in this country. Reducing those emissions is absolutely necessary.”

California Senate Republican Leader Shannon Grove is opposed, saying, “The fact is that Californians cannot survive without oil and gas or petroleum byproducts. These products are not just the gas in our cars, they are the asphalt on our roads, the plastic holding together electric vehicles, medical equipment vulnerable patients rely on, footballs our children play with, telephones, toothpaste, trash bags, and so much more. Instead of producing it under the strictest environmental regulations in the world, our state will be doing more business with foreign regimes that have abysmal environmental and human rights standards.”

Assembly Democratic Leader Anthony Rendon also praises the decision, saying “Governor Newsom’s action may be a surprise to some, but I see it as a continuation of what California has been doing for more than a decade. We have pushed climate goals beyond what most of the nation thought was possible. I thank the Governor for continuing in that vein.”