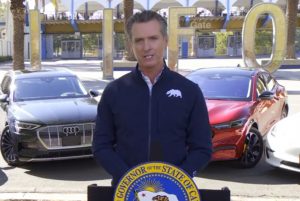 Sacramento, CA — Governor Gavin Newsom signed an executive order to completely phase out the sale of new cars with internal combustion engines by the year 2035.

He says it will force California businesses to further innovate in the “no carbon” energy sector, noting that the state already has 34 electric vehicle manufacturers.

Newsom acknowledges that it will be a difficult journey, stating, “Not everybody is going to join hands on this. But one thing I know…this is the trend line that will become a headline across the rest of the world. We are not just going to be in the back of this bus. We are going to be leading once again, and we are going to be driving this accelerated change.”

Newsom stressed that people will still be able to operate and sell used gas-powered cars after 2035.

Newsom argues that the change is necessary, as the transportation sector is responsible for more than half of all of California’s carbon pollution, 80 percent of smog-forming pollution and 95 percent of toxic diesel emissions.

He concluded, “This is the most impactful step our state can take to fight climate change. For too many decades, we have allowed cars to pollute the air that our children and families breathe. Californians shouldn’t have to worry if our cars are giving our kids asthma. Our cars shouldn’t make wildfires worse.”

Newsom said he will be working in partnership with the California Air Pollution Control District to map out a plan forward.

The order is anticipated to receive opposition from many automakers. The Trump Administration also has an existing lawsuit going through the legal process challenging California’s authority to set its own vehicle gas mileage standards.