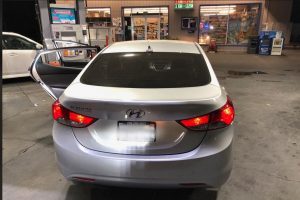 Jamestown, CA – A report of a fight led to a traffic stop that turned up a surprise in the car’s sunglass compartment.

The call came in early Sunday morning reporting a large group physically fighting in the vicinity of North Drive in Jamestown. As a Tuolumne County Sheriff’s Deputy was responding to the location, a passing vehicle, driven by 25-year-old Angela Mendez of Modesto, almost collided with the patrol car.

The deputy made a U-turn and caught up with the vehicle on Highway 108 and pulled it over at a local gas station. Mendez was determined to be intoxicated and driving under a suspended license and subsequently taken into custody. Also, inside the vehicle was 28-year-old Anthony Ahumada of Modesto.

While searching the car a deputy opened the sunglasses compartment and discovered a stolen .32 caliber, L.W. Seecamp Co. handgun. Sheriff’s officials say Ahumada admitted to having the stolen firearm. Further investigation determined that he belonged to a criminal street gang. Ahumada was handcuffed for a known gang member carrying a concealed firearm and for having the stolen gun.