Sonora Looking At Ways To Save Christmas Parade 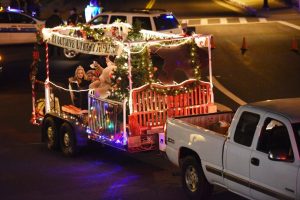 Sonora, CA — The City of Sonora is considering how to hold some form of a Christmas Parade in the time of COVID-19.

It was discussed at last night’s City Council meeting.

Caltrans has already notified the city that closing Highway 49 through downtown is currently not an option because the agency is not giving out encroachment permits until Governor Newsom releases COVID related restrictions.

Mayor Matt Hawkins stated, “If we don’t follow what the state tells us to do, there are a lot of consequences that could happen to our little city. It could be monumental, or bankrupting, essentially, for our little city. So, I really want the public to understand that. In that, we are trying to find any gray areas so that we can do this. It is important to both our businesses, and our morale.”

City Administrator Mary Rose Rutikanga noted that one option being considered by city staff is having a line of cars wind through various city streets to show appreciation to the community, without actually closing any roads. It may not include the traditional large floats, and people walking alongside, but it would be a way to keep the parade going, in a new COVID-19 way.

A majority of the councilmembers vocally supported the idea.

Community Development Director Rachelle Kellogg added that the city is also working on a plan to still have Santa in Courthouse Park this year, with social distancing measures in place.

The parade, a traditional kickoff to the holiday season, is annually held on the Friday after Thanksgiving.

Meanwhile, it was announced last night that the City of Sonora’s upcoming “trick or treat street” has been canceled this year.