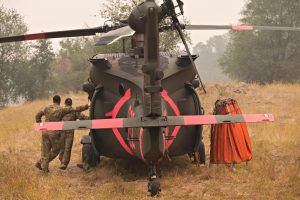 Fresno, CA — The Creek Fire which ignited in Fresno County, and has been responsible for the heavy local drift smoke, is now 278,000 acres and 27-percent contained.

Governor Gavin Newsom announced this afternoon, “It is now the seventh-largest fire in California’s history. It is primarily a federal fire but impacting parts of the state and our responsibility area.”

Newsom noted that the unfortunate record-breaking 2020 fire season continues to grow, as 3.6 million acres have now burned. Newsom stated that at this point last year, only 157,000 acres had burned.

For comparison sake, the Rim Fire, which ignited in 2013 in Tuolumne County, burned 257,314 acres. At the time it was the third-largest fire in the state’s recorded history. It is now 10th on the list. The largest fire ever on record is the August Lightning Complex Fire in Tehama County. It ignited last month and has burned over 836,000 acres.