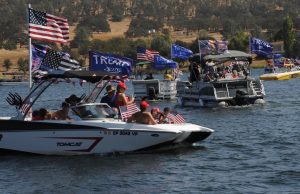 Copperopolis, CA — Boat parades in support of President Donald Trump have been gaining in popularity nationwide, and one was held over the weekend at Lake Tulloch.

It was organized by the organization Calaveras County Republican Women Federated. Many of the boats were flying “Keep America Great,” “Trump 2020,” and American flags. There were many “Make America Great Again” red hats and one jet skier was even wearing a President Trump mask.

An estimated 100 boats were on hand for the event, and some were also on the shoreline to greet the boaters.

Click on the image box to view some photos. Boat parades have been taking place in many areas across the country ahead of the November 3 election.