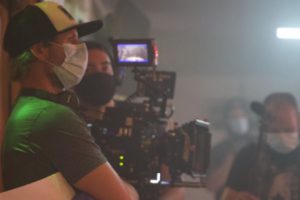 Sonora, CA – It was camera, lights, action this summer in Sonora as a Los Angeles production company shot its entire horror film in Tuolumne County.

Tidal Wave Entertainment Co-Presidents Lydia Cedrone, the film’s producer, and Justin LaReau, also the director, had not originally picked the county for the location of their slasher film “Lantern’s Lane,” but the shoot was interrupted by COVID-19.

“In March, we were on course to shoot in Los Angeles in May. Then COVID-19 hit,” says Cedrone. “We worked nonstop to develop an alternative plan for this film. We had an obligation to our investors and to ourselves to keep going.”

That is when they turned to the internet, adds LaReau, “We needed to look outside of LA to shoot, so we researched all over the state. We did pretty much everything via Zoom, including auditions, crew hires, you name it.”

Another helpful tool the Tuolumne County Visitor’s Bureau, Cedrone explains, “When scouting the region, my first call was to Lisa Mayo of Visit Tuolumne County. She and Bethany Wilkinson, her Film Liaison, were incredibly helpful to us. Both Justin and I were struck by the county’s diverse landscapes and charming towns.”

Once the locations were picked, shooting began on July 24th. The sites included a home in the county and a local bar, “Steve’s Place” on Tuolumne Road, owned by area local Jan Thomason. The filming wrapped in August. Pictures in the image box show a behind the scene look at the filming in those locations and others.

During the filming, COVID-19 played a starring role as it required the 22-person crew and four cast members to be tested three times a week at a local hospital. All tested negative before leaving Hollywood and heading to Tuolumne County. Also, coronavirus protocols including temperature checks, wearing masks, and gloves were followed during shooting.

One of those actors was Tuolumne County native and Sonora High School graduate, Robbie Allen. The 35-year-old actor currently lives in LA. The movie’s plot centers around a recent college grad that returns to Lantern’s Lane, the site of an evil urban legend and the group must survive the night. Allen plays Braxton, one of the three estranged high school friends, including also includes his former ex-girlfriend who he has not seen in 7 years.

Allen credits include AHC’s “How We Got Here,” Amazon Prime’s “City of Gold” and “The Silent Natural,” and the award-winning short film “The Redeemer” among several other projects. He is also the Artistic Director of Murphys Creek Theatre in Murphys and The Merely Players Shakespeare Co. in Los Angeles.

Lantern’s Lane principle stars are Brooke Butler who has also head roles on “Ozark” and “CSI Crime Scene Investigation” and Andy Cohen featured in “Grey’s Anatomy,” “Ray Donovan,” and NCIS.” No date is currently set for the release of the movie. Click here for more information about the production company.