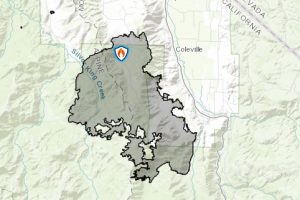 Walker, CA – While the Slink Fire’s acreage has doubled in size in a week, forest fire official relay that crews are making good progress.

The fire is burning in Mono County near the Marine Corps Mountain Warfare Training Center. As reported here last Wednesday, the flames had scorched 11,000 acres forcing the shutdown of a section of Highway 395 along with evacuations in Walker and Coleville. Residents have returned to their homes, but the flames continue to gobble up acreage.

Currently, the fire is 21,755 acres and containment has increased to 36 percent.  Forest fire officials note that they expect the fire active on Mineral Mountain and Corral Valley Creek west of Antelope Peak. Today’s fire suppression efforts will concentrate on the west side of the fire, using indirect and direct tactics on Mineral Mountain and the East Fork Carson River drainage. Crews are also building hand lines, using helicopters for water drops, laying hose, and installing pumps to prevent the fire spreading west of East Fork Carson River, detail forest fire officials. Repair work will begin today on the east side of the fire above Highway 395 as well.

On Monday, the Bureau of Land Management increased its fire restrictions to prohibit all uses of open flame including campfires, barbecues and stoves, on BLM-managed public lands in the state of California.