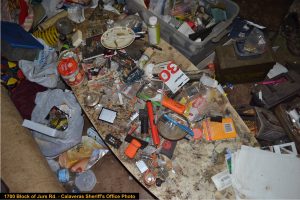 West Point, CA — Officials have been actively investigating an explosion that led to a house fire in West Point.

It happened back on August 23 in the 1700 block of Jurs Road. One unidentified person suffered burn injuries in the incident and was taken to a hospital out of the county for treatment. The fire was contained to the home and did not spread to any vegetation. Afterwards deputies served a search warrant at the residence.

Providing an update, Sgt. Greg Stark reports, “The investigation revealed that a marijuana extraction operation, commonly referred to as a Butane Honey Oil Lab, had been a contributing factor in the cause of the explosion and fire. Evidence which was seized included 33 growing marijuana plants, approximately one pound of processed marijuana, approximately eight pounds of marijuana leaves and stems, nine firearms, drug paraphernalia, and evidence pertaining to the marijuana extraction lab.”

The value of the marijuana extract seized is estimated to be between $780-$1,350,

An investigation is ongoing. There is no word yet regarding any potential arrests.