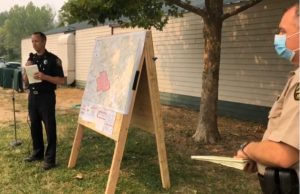 Sonora, CA — We are not out of the woods yet, but things are moving in the right direction. That was the tone of a community meeting Monday at the Mother Lode Fairgrounds regarding the Moc Fire.

The fire has been holding at 2,800 acres over the past couple of days, and there is 20-percent containment.

Early on there was a big concern that the fire would jump Priest Coulterville Road, and quickly head to Groveland and Pine Mountain Lake. That is why such a wide area was evacuated.

There were also concerns about the ability to get fire resources, given all of the incidents across the state, but as of today, around 750 firefighters are on scene.

Jackass Gulch in Mariposa County has been the area of most recent concern, and activity, due to the steep and tough terrain. Crews continue to make progress building containment lines.

Tuolumne County Sheriff Bill Pooley stated that he will be working with the incident command team today to further develop a “repopulation plan” in the evacuation zone.

He stated, “Our main goal, and the mission of everyone helping out, and all the folks who have come from out of county, is to get you back in your homes as safely, and quickly, as possible.”

CAL Fire spokesperson David Lauchner noted that some areas around Groveland had power restored yesterday, and others will have the lights back on later today.

He added that many of the resources assigned to the Moc incident will remain in place over the next couple of days because of the threat of new lightning fires popping up in the region. He noted that last night’s storm activity, and lightning, had no negative impacts on the Moc Fire.

Click here to view an earlier story about the various lightning caused fires.