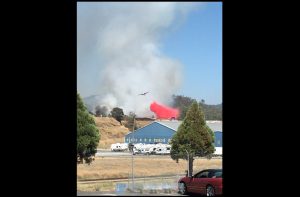 Standard, CA — While full containment has been reached, officials are still working to completely extinguish the Phoenix Fire in the Standard area.

Firefighters will remain on scene this morning. It ignited at around 3pm on Wednesday behind the Sierra Pacific Industries Standard Mill. What ignited the blaze is still under investigation, according to fire officials. It burned an estimated 5.8 acres. Thousands initially lost power related to the fire, but PG&E reports this morning that everyone has now been restored.

Tuolumne County Sheriff’s officials also evacuated people from nearby Standard businesses yesterday, but the evacuation warning has now been lifted. We’ll pass along more information when it becomes available. Click here to view a recap story from Wednesday.