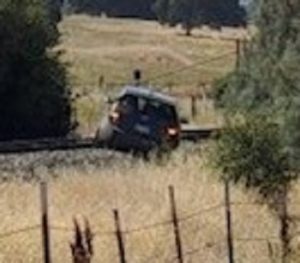 Sonora, CA — The CHP reports an odd motor vehicle incident during which a driver and her passenger briefly went airborne.

CHP Sonora Unit officials say just before 9 a.m. 35-year-old Shonda Bledsoe of Turlock was driving in her 2013 Chevrolet Sonic along with her passenger, 46-year-old Floyde Watts, Jr. of Turlock. They were southbound on a set of railroad tracks just north of Sims Road, traveling around 55-60 miles per hour as they approached an intersection on the tracks.

Officials state that the occupants were wearing their seatbelts and were uninjured as a result of the collision. They add that it is unknown when or how the vehicle ended up on the tracks and that alcohol or drugs are not suspected to have contributed to the situation.