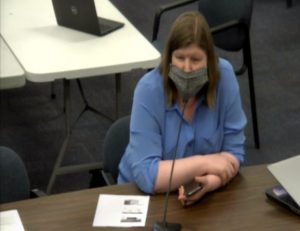 Sonora, CA — The recent increase in coronavirus cases has put Tuolumne County closer to the state’s limit related to how many active cases it can have before having additional mandated business restrictions.

The State Of California says that if a county has 100 cases per 100,000 residents, during a 14-day window, and remains at the level over three consecutive days, it will be placed on the state monitoring list. Based on Tuolumne County’s population, it translates to 53 cases over a 14 day period.

If added to the list, businesses and groups that would have to cease operating indoors include things like hair salons and barbershops, places of worship and gyms. In addition, schools would be forced to do all distance learning until the county is off the monitoring list for 14 consecutive days.

Interim Health Officer, Dr. Liza Ortiz, warned that there is COVID-19 community transmission in “all parts of the county.” She added that the nearby Central Valley now has more cases per capita than the Bay Area and Southern California. Hardest hit counties include San Joaquin, Stanislaus and Fresno.

Also on the topic of COVID-19, during the public comment period today there were concerns raised by members of the community about the length of time it takes to get in and then receive the results when going to the state testing site at the Calaveras County Fairgrounds. Dr. Ortiz encouraged everyone to reach out to local health providers first, to potentially receive testing quicker, then at the state’s site.

The Public Health Department also announced that the new education and compliance division is ramping up and will have “boots on the ground,” likely by Monday. Click here for more information on the effort.  Supervisor Anaiah Kirk referenced a new myMotherLode.com blog he authored and stated that he wants it to be more about businesses succeeding, and less about regulating them. He noted that he would rather have people just turn around and leave the business if they are concerned about employees not wearing masks, instead of getting into a debate with the owner, or reporting them to the county. He was then criticized by some community members during the public comment period about the remarks. Kirk added that he has heard about political groups going out and targeting businesses, and he voiced concerns about this happening.