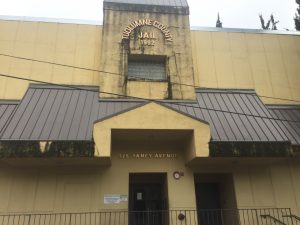 Monday afternoon, Tuolumne County sheriff’s officials say they were advised in the morning of two additional positive COVID-19 test results at the county’s jail facility. The cases include one inmate and one staff member assigned to the jail. Both were tested during the third round of testing at the facility.

Officials say the inmate remains in custody and has been for the past several months. The staff member is in self-isolation and compliant with the health officer’s track and trace protocols.

As reported here, a second inmate tested positive Sunday while a previous inmate was confirmed as having coronavirus last Wednesday when a staff member was also found to have contracted it.

Officials note that Inmates with an elevated risk of exposure have been provided additional personal protective equipment (PPE) and are being housed separately, per the health officer’s quarantine procedures. In addition to the precautionary measures already being taken, the Sheriff’s Office has implemented added protections to ensure staff and public safety.

Among these are isolating all staff members to their respective divisions; canceling or limiting non-essential functions and operations within the Sheriff’s Office; weekly commercial-grade sanitizing of all office workspaces along with the interior and exterior of department vehicles; continuous COVID-19 testing for exposed staff; and new state-of-the-art sanitation technology with the Surfacide UV disinfecting light system. The system was purchased with COVID-19 CARES Act funds awarded to Tuolumne County from the federal government.