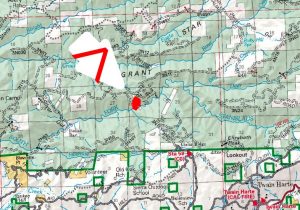 Update at 6:48pm: The US Forest Service reports that 10-percent containment has been reached on the Quarter Fire, and the incident remains 15 acres. All of the evacuation advisories for Cedar Ridge have been lifted.

Fire Overview: the fire size held at 10 acres. A drone’s interference in the fire fight was detailed here. Containment details were posted here.

Update at 10:25am: Gaining access to the Quarter Fire near Cedar Ridge has been the biggest challenge over the past two days for firefighters working to extinguish the 15-acre incident.

There are no roads leading directly to the fire in the Stanislaus River Canyon.

Some success though has been made, as Forest Service spokesperson Maria Benech says, “Overnight we had a lot of good work done by dozers putting in contingency lines, as well as getting access down to the fire for our crews and engines.”

Benech adds, “We have hand crews going in today and hopefully we’ll be able to do direct line, wherever it is safe and possible, around the fire, and that’s good news for us.”

Initially, a larger Type 1 Incident Management Team was scheduled to take over the lead operations at noon today, however, that has been canceled, a likely sign that firefighters are making more and more positive headway.

273 firefighters are assigned to the incident, eight hand crews, six engines, four air tankers, a helicopter and nine dozers. The aircraft has been successful at keeping the fire in check. The Forest Service notes that is has been a “full suppression” effort from the start.

The sheriff’s office continues to issue an advisory evacuation notice for all of Cedar Ridge.

To view a map of the Quarter Fire area, click here.

Fire Overview: the fire size held at 10 acres, the containment jumped from 10-percent as reported here on June 23, to 60 percent later in the same day here. A drone’s interference in the fire fight was detailed here. Containment details were posted here.

Original story posted at 8:15am: Sonora, CA — The Stanislaus National Forest reports this morning that the Quarter Fire near Cedar Ridge remains 15 acres.

Hand crews are hoping to gain access today so that they can place a direct line around the fire.

The Tuolumne County Sheriff’s Office continues to issue an evacuation advisory for all of Cedar Ridge.

Click here to view a webcam of the fire area. Less smoke is visible today when compared to this time yesterday morning.

Click here to view a progression of events from Sunday.

We’ll pass along more information as it becomes available this morning.

As of late yesterday, there were three air tankers, three helicopters, 11 engines, five hand crews and 273 firefighters assigned to the incident.