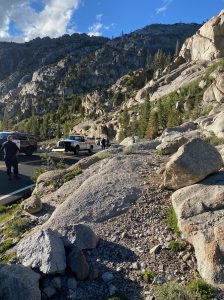 Tuolumne County, CA – Officials have released the identities of the two men who perished in a box truck crash after plunging off a section of Highway 108 near Sonora Pass.

According to Tuolumne County Sheriff’s spokesperson Deputy Nicco Sandelin, the two victims of the solo accident have been identified as 29-year-old Jorge Maciel and 47-year-old Salvador Ponce Espinoza, both of San Jose. Their exact causes of death and have not yet been released.

Few details are available about the nature of their travel other than it appeared that the two might have been employed by a moving company.

As reported here Wednesday, the area of the road where the truck left the highway was around the 9000-elevation mark on the pass at a hairpin turn, just west of the Mono County line.

According to CHP Sonora Unit officials, the truck was last seen in the Bridgeport area on Monday night and wreckage that turned out to be that vehicle was spotted in the noon hour Tuesday by a passerby who called 911. Shortly afterward the men were located and pronounced dead at the scene.

Officials say the truck was headed westbound at an unknown speed down the grade when the driver failed to negotiate a sharp right-hand turn, traveled across the opposing lane and off the road where it collided into a tree and a large granite rock.

As the truck ended up in Deadman Creek with its contents strewn about, County Environmental Health Director Rob Kostlivy was called in, determined there had been some fuel and other possible hazmat material leakage downstream, cautioning those at campsites that could potentially come into contact with it. Another sweep of the area was planned for Thursday.