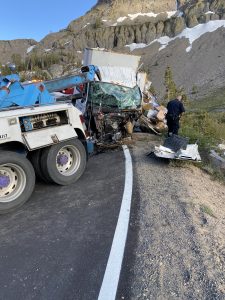 Tuolumne County, CA – The CHP reports that two San Jose men were killed when their box truck went off Highway 108 Sonora Pass and smashed into a boulder and tree, causing fuel to leak into a creek.

The CHP has released new details on the wreck, earlier reported here, located around the 9000-elevation mark on the pass at a hairpin turn, west of the Mono County Line, but not the names of the two men killed pending notification of their families. The 47-year-old driver and his 29-year-old passenger are believed to be employees of a moving company, according to CHP spokesperson officer Steve Machado, who explains that its name is not being released either, as it could identify the deceased.

It is unclear exactly when the crash happened. Machado shares that the box truck was last seen in the Bridgeport area on Monday night (June 15) and it was not spotted until the next day. The truck was headed westbound at an unknown speed, Machado recounts, “While traveling down the grade, the driver failed to negotiate a sharp right-hand turn in the roadway. The vehicle traveled across the opposing lane and off the roadway where it collided into a tree and a large granite rock.”

The collision was not spotted until around 12:30 p.m. on Tuesday (June 16) by a passerby who called 911. Both men were pronounced dead at the scene. Machado relays that the truck was laying across Deadman Creek with its contents strewn about, prompting Tuolumne County’s Environmental Director Rob Kostlivy to be called in to check for any hazardous material spills.

“When we pulled the truck out, we actually had to remove some of the diesel saddle tanks. There was actual creek water in it, so we are assuming that all the content went down the creek. We do not know how much fuel went into the creek because there was no fuel manifest,” stated Kostlivy.

There is always a concern when a foreign material gets into a creek due to what might be downstream, advises Kostlivy. In this case, that includes the Kennedy Meadows area and some camping sites. He relays that all in those areas were notified that some hazardous materials could be found in the water.

“It looked like there was also a refrigerator, so there would be some sort of refrigerant,” indicates Kostlivy. “We are meeting the forest service up there tomorrow to do another reassessment. Just to make another sweep of the area to make sure nothing was missed, or no other hazmat has to be pulled out.”

This collision remains under investigation with alcohol and/or drugs determined not to be a factor. Machado says they will not know the exact cause and time of death of the victims until autopsies are completed.