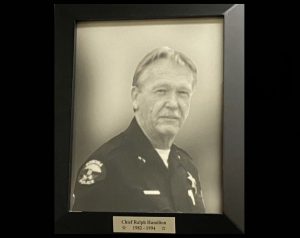 Sonora, CA — A former Sonora Police Chief, who led the department throughout much of the eighties and early nineties, is remembered for being a mentor and community leader.

Ralph Hamilton, who served as chief between 1982-94, and continued to reside in Tuolumne County following his retirement, passed away this week.

Sgt. Glenn Roberts, who worked with Chief Hamilton, says he was a “mentor” who always had the best intentions for the staff, department and city. He challenged officers to “be the best they can be,” and “installed good work ethics.”

Sgt. Roberts, stresses, “He was one of the best chiefs I’ve worked with during my time with the city.”

It is noted that Chief Hamilton was involved in various community service clubs, including serving as President of the Sonora 49er Rotary Club, and always participated in things like the Police Department softball teams.

He followed Chief Ronald Wano in 1982 and was succeeded by Chief Mike Efford in 1994.

Funeral service information has not been announced.