Hiker Rescued After Falling Down Steep Ravine In Columbia Area 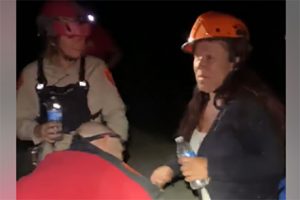 Female hiker rescued from fall down a ravine in Columbia

Columbia, CA – A rescued hiker from Atwater, shown in the image box video, expressed how thankful she was to be rescued after falling several hundred feet down a steep ravine in the Columbia area.

A call came into dispatch around 8:30 p.m. Monday night after a man from Modesto who was hiking with the woman near a river along Italian Bar Road took off to get help. He was able to find other hikers with a phone who called 911. It took Tuolumne County Sheriff’s Search & Rescue team (TCSAR) about three hours to reach the women and hoist her to safety. Sheriff’s spokesperson Nicco Sandelin explains how the ordeal began, “They were hiking, and the terrain was loose. She took a step and due to the loose terrain, her foot slipped out from underneath her causing her to slide down the hillside. It was rough terrain covered with brush and rocks.”

The hiker was stuck about 700 feet down the embankment which required a technical rope system to be used from the roadway to rescue her, Sandelin details, “They sent one of the TCSAR team members down to check on her [the hiker]; determined that the equipment that the TCSAR team member had with her was sufficient enough and they were able to hoist her out.”

Luckily, the woman was just a little shaken up by the fall but not injured. Sheriff’s officials did not release the name of the woman or her companion.