Update: Protest In Oakdale Underway Ahead Of Sonora 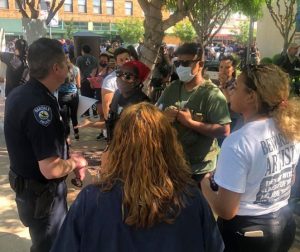 Update at 3:35pm: Some violence has broken out at the protest in Oakdale. Details are limited, but the Oakdale Police Department has now declared the protest to be an “unlawful assembly.”

Original story posted at 10:37am: Oakdale, CA — With a protest planned in Sonora later this afternoon, a similar type event is taking place 35 miles down the road in Oakdale this morning.

Ahead of the event, the City’s Police Chief, Scott Heller issued a statement to the community that he anticipated that it will be a peaceful event, and he also stated that his department will be on scene, and monitoring how things unfold. He stated that the department “supports the right of free speech and would provide a safe environment for everyone’s voices to be heard.”

The protest started at 10am in front of the Gene Bianci Community Center. At around 10:20am, the Oakdale PD posted pictures on social media, with the caption, “Chief Heller meeting with protestors. We appreciate the positive discussion and peaceful assembly.”

Click on the photo box to view other early images.

To read a story about Sonora’s protest, set for 1pm at Courthouse Park, click here.