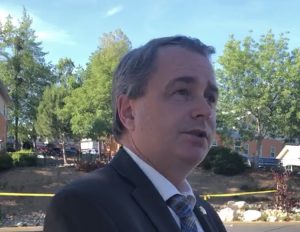 Update at 6:25 pm: Tuolumne County Sheriff Bill Pooley has made a brief comment to the media about today’s shooting in Jamestown. At this time the Sheriff’s Office is not releasing the name of the man shot because officials are still notifying family members. Click on the video box to view the Sheriff’s comments. At one point the suspect produced a firearm, which led to him being shot, and the sheriff’s office investigation later learned that it was a replica firearm. We’ll pass along more information as it becomes available.

Update at 4:15 p.m.: While detectives remain on the scene of an officer-involved shooting at the Preston Lane Apartments in Jamestown, Tuolumne County Sheriff’s officials have signaled that they will be holding a news conference to release more details regarding the shooting. An ambulance did leave the scene about 40 minutes after the gunfire erupted.

Residents are now being allowed to come and go from the apartments, however, the complex remains taped off with deputies not allowing anyone to enter that does not live there. Further details on the shooting are below.

Original post 2:35 p.m.: Jamestown., CA — Tuolumne County Sheriff’s investigators are currently on the scene of an officer-involved shooting in Jamestown.

After hearing scanner activity around 2 p.m., Clarke Broadcasting asked Tuolumne County Sheriff’s officials about a report of a shooting in Jamestown involving deputies and a man who had been holed up in his home. Sheriff’s spokesperson Nicco Sandelin responded via text, “We are currently investigating an officer-involved shooting which just recently occurred at the Preston Lane Apartments in Jamestown. More details will be released at a later time.”

Around that same time, we received a call into the news center from a man who did not want to be identified but said he had just witnessed a shooting. He stated, “The man came out of his apartment and the deputies shot him several times.”

There is no word on the condition of the man who was shot or why the deputies had come to his home. An update on this shooting will be provided as soon as more information comes into the newsroom.