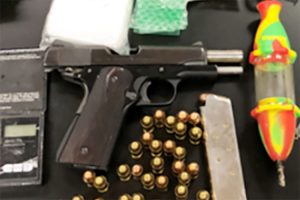 San Andreas, CA – A Valley Springs man was found at a San Joaquin home with a large stash of drugs and items used in narcotic sales.

A probation check on 36-year-old Daniel Mantz by Calaveras County Sheriff’s Deputies and probation officers at a home in Lodi landed him with fresh felony charges. It was a little over a year ago that Mantz was arrested in the Valley Springs area after a traffic stop and search by deputies turned up two guns, one loaded, and a baggie with suspected methamphetamine, as reported here.

This latest arrest took place last Friday. Once again, sheriff’s officials say a search of the residence uncovered 55 grams of methamphetamine, 36 grams of heroin, 12 grams of hallucinogenic mushrooms, a stolen handgun, ammunition, drug paraphernalia and evidence of drug sales such as packaging and a scale.

Mantz was taken into custody without incident for numerous felony drug trafficking charges and probation violations. Sheriff’s officials are sending the following charges to the San Joaquin County District Attorney for prosecution:

Mantz remains in the Calaveras County Jail with no bail due to the violation of probation charge.