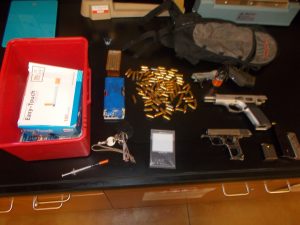 According to Calaveras County Sheriff’s spokesperson Sgt. Greg Starke, around 1:30 Wednesday afternoon, deputies initiated a traffic stop in Valley Springs on Pardee Dam Road near Campo Seco Road. Contacting the driver, 35-year-old Daniel Mantz who resides in Valley Springs, they discovered he had six warrants out on him out of Sacramento and Calaveras counties.

While the investigation is ongoing, Mantz currently faces additional charges of being a felon possession of firearms and ammo and possession of unlawful paraphernalia and burglary tools. He was given a $35,000 bail.