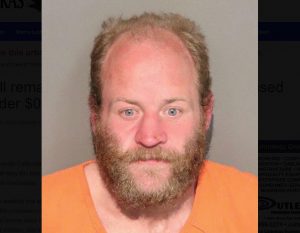 San Andreas, CA — Hoping to keep a suspected stalker behind bars until his case can be prosecuted, law enforcement officials report there are new pending charges.

Calaveras County Sheriff Rick DiBasilio and District Attorney Barbara Yook were already requesting a bail enhancement — essentially a “no bail” hold — in recent charges against 40-year-old Jeremy Costa of San Andreas. He had been arrested by Angels Camp Police for stalking a teen victim and was released April 13 under a temporary COVID-19 emergency order by the Judicial Council that requires jails to assign a “zero” bail to those facing misdemeanors and “lesser” felonies.

A sore spot for most law enforcement officials, including the sheriff, who has openly opined as to the increased risk to public safety, he thinks this particular suspect is one whose actions indicate he should remain in jail.

On Friday, the sheriff reported that Costa, who could have been due in court sometime before 5 p.m., would now not be seen until probably next Tuesday due to the new charges. Asked if the offenses related to the existing ones on the books, DiBasilio replied, “I have no other info other than he will stay in custody pending new charges.”

Costa’s most recent arrest came out of incidents that occurred this past Tuesday night and early Wednesday after he was reported to be knocking on a homeowner’s door in San Andreas and refusing to leave. Responding deputies escorted him from the area but he returned within a few hours, initiating another disturbance. He was rearrested around 11:30 a.m. on California Street in San Andreas on the charges of stalking, trespassing, and probation violations.

He was subsequently transported and booked into the Calaveras County Jail and this time the Sheriff’s Office requested a bail increase, which triggered the judge to issue a temporary no bail hold that allowed officials to hold him until his arraignment on Friday.

With the pending charges added, the sheriff reiterates that Costa will at least remain jailed until an arraignment possibly on Tuesday. Again, he says, it is up to the judge. In the meantime, his office and Angels Camp Police are now working in tandem with the District Attorney’s Office to address the collective cases that are continuing to build against Costa.

DiBasilio calls the Judicial Council’s emergency order not only detrimental to the justice system but a move than unnecessarily places both crime victims and witnesses into difficult and potentially dangerous situations. He says he is working with the other California sheriffs and the State Sheriff’s Association to address the issues they see arising.