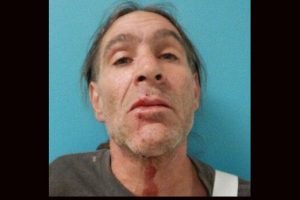 Columbia, CA – Following a brawl at a home in Columbia, a Sonora man allegedly threatened to stab another man, and was later arrested by deputies, but not before putting up a fight.

The clash between the two men occurred at a residence on Highway 49 near Columbia recently. Tuolumne County Sheriff’s Dispatch relay that when deputies arrived at the scene, they found the victim with visible injuries to his face. The wounded man recounted that 49-year-old Keith Flowers attacked him and threatened to stab him if he did not leave. The victim alleges that Flowers struck him in the face. Then says when he was trying the flee Flowers slashed two of his vehicle’s tires.

Flowers remained in the home and when deputies tried to question him, he put up a brief struggle, according to sheriff’s officials. None of the deputies were hurt in the altercation, but Flowers suffered minor injuries. He was assigned a bail of $25,000 after being arrested for making criminal threats, resisting arrest, vandalism, and battery.