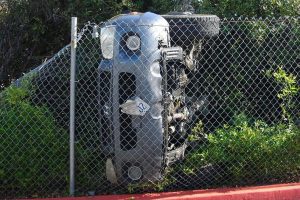 Overturned vehicle that smashed through fence behind Walmart

Sonora, CA – A stunt driving trick called “drift” did just that into a fence behind a Sonora store resulting in a DUI arrest for the driver.

“Drift” according to Sonora Police is when a driver going at a fast rate of speed pulls the emergency brake causing the vehicle to drift or slide across the pavement. That is exactly the maneuver Sonora Police say 20-year-old Anthony M. Tuchsen of Sonora tried in a 2003 Hyundai behind the Wal-Mart store at the Crossroads Shopping Center off Sanguinetti and Wards Ferry roads on Sunday afternoon.

However, Tuchsen was unable to pull off the trick. He lost control of the car and it ended up smashing into a chain-link fence and flipping onto its driver’s side. He was able to get out of the vehicle and run away on foot, but officers caught up with him nearby. Noticing signs Tuchsen may be drunk, he was arrested for suspicion of DUI. He and his 20-year-old male passenger did not suffer any injuries in the collision.