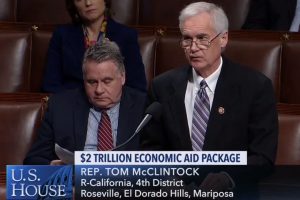 Sonora, CA – Some mixed reaction from California lawmakers as the federal government’s COVID-19 supplemental stimulus package is passed with the governor cheering it and a Mother Lode congressman jeering it.

Despite Mother Lode Congressman Tom McClintock’s vote in favor of the federal stimulus package or “CARES Act,” before casting that vote he made his objections known on the House Floor Friday.

“The unprecedented spending in this bill threatens to destabilize the fiscal structure of our federal government and suppress future economic growth.  But in order to deal with those issues, we must first arrest the damage caused by actions that have plunged us into recession,” stated McClintock. In the end, he conceded, “Despite all its flaws, passage of this bill today is therefore imperative. But it is no substitute for getting Americans back to work.” The congressman’s entire speech can be found at the bottom of this page.

Governor Gavin Newsom’s take on the bill was exactly the opposite.  Newsom asserted that the stimulus bill will provide critical support for California to fight COVID-19 and strengthen hospitals and the health care system. He further expounded that it means an additional $600 a week in unemployment insurance, provides emergency loans and grants to help small businesses and non-profits keep people employed and provides direct aid to state and local governments.

Noting that states and local governments are on the front lines of fighting this pandemic, he adds, “They will need additional and flexible funding to ensure they can continue responding to this crisis and continue critical services. California businesses and residents will also need additional federal support to weather this economic storm.”

McClintock’s entire CARES Act statement can be read below:

Covid-19 didn’t kill our economy.  Government policies, however well intentioned, did.  In just a few weeks, they derailed the most prosperous and promising economy of our lifetimes and put us in imminent danger of permanently destroying millions of American jobs.

The CARES Act will much more than double the current deficit, which is already unprecedented and unsustainable.  It threatens to destabilize the fiscal structure of our federal government, suppress future economic growth and create fiscal pressures that will take decades to unravel.

But in order to deal with the future problems this bill creates, we must first deal with the immediate crisis by arresting the damage caused by recent actions that have laid waste to our prosperity and plunged our nation into a sudden and deep recession.

The government has created a liquidity crisis for both employers and families.  Employers’ revenues have plunged, giving them the Hobson’s choice of firing employees, selling assets in a fire sale or defaulting.  Jobs temporarily lost will quickly become jobs permanently lost.  They need ready access to capital, and the core of this bill does so.  Families face a similar challenge.  They need their jobs restored quickly and a way to recoup their financial losses.

This strongest argument for this bill is that it provides liquidity for employers and spending money for families.  The strongest against it is that it does so inefficiently, wastefully and at enormous cost.

If there was any practical reason to believe the defeat of this bill would be followed quickly by a measure that would correct its many flaws, I would vote no.  Congress is operating in a blind panic and the massive temporary damage to the economy will soon become permanent damage if relief is delayed for more than a few weeks.  I have no confidence that a better measure can be quickly forthcoming.

Our system wasn’t designed to make the best possible decisions, but rather the best decisions acceptable to the most people.  Given the current Congress, this is it.

And now for the good, the bad and the ugly:

1.  Provisions of the bill cut the red tape that prevents or delays new medicines and vaccines from coming to market and advances telemedicine as a safer and low-cost alternative to conventional consultation.  These reforms are vital to bring vaccines and treatments to market as quickly as possible.

2.  It re-writes Dodd-Frank to restore to lenders and borrowers the flexibility to adjust the provisions of loans to meet changing conditions.  It is not in the interest of lenders to have their borrowers go under, and in a crisis like this, lenders need the flexibility to forebear repayments to prevent a liquidity crisis for their borrowers from becoming an insolvency crisis.  Dodd-Frank denies them that flexibility.  This provision restores it.  Other provisions adjust reserve requirements and other regulations that will make access to capital easier.

3.  The ONLY answer to a liquidity crisis is liquidity – easy access to capital through discounted loans and loan guarantees.  This bill provides $529 billion of capital in this manner so that businesses can meet obligations without facing insolvency.  This is critical to prevent permanent destruction of businesses that just a month ago were thriving.  It is unfortunate that the bill provides special carve-outs for certain sectors – in effect picking winners and losers – and imposes operating conditions on those businesses.  But these are minor flaws in a provision absolutely essential if the economy is to recover.

4.  Small businesses need exactly the same access to credit.  Instead, this bill makes forgivable loans (grants in reality), up to 250 percent of a business’ payroll it agrees to keep all employees.  This will probably keep most cash-strapped businesses afloat and their employees paid.  It will also give a windfall to others who don’t need it.  A grocery store that’s just had the best month in its history is in no need of capital, and has no intention of firing anybody, but would be foolish not to take the offer.  Meanwhile, the dry cleaner next door has had the worst month in its history – it has a small payroll but huge debt service for equipment and probably doesn’t have enough of a payroll to cover the rent and debt service on its equipment.  It defaults and goes under.  Each small business has different needs in this crisis, and ought to have access to federally guaranteed loans to get through.  Loans provide these businesses the incentive to borrow just what they need; grants provide an incentive to take whatever is available whether it is needed or not.  This provision is seriously flawed, but still does more good than harm.  Unfortunately, it also guarantees a serious misallocation of resources.

5.  The bill spends upwards of $500 billion to provide $1,200 cash grants for individuals, $2,400 for couples and $500 for children up to $75,000 for individuals and $150,000 for couples.  For millions of families who have seen their paychecks stopped and their savings dwindle this is a Godsend.  Others have been able to maintain their incomes.  Giving cash grants to everyone regardless of whether they’ve lost earnings dilutes the provision’s objective to get cash into the hands of cash-strapped families, again assuring a misallocation of resources.

6.  This bill extends and expands unemployment benefits for those not previously covered to 39 weeks, in addition to the 26-week extension (for a total of 52 weeks) already enacted.  Extended benefits were a feature of the government’s response to the 2008 mortgage meltdown and caused many workers to delay their re-entry into the workforce.   Another provision adding $600 to benefits will actually pay many workers more not to work.  Unemployment insurance should be a safety net providing a recipient the time to transition to another job as quickly as possible.  That is especially important now.

7.  The bill provides for a staggering amount — $340 billion – for a wide array of assistance to everything from states and counties to local colleges and universities with no objectives and no oversight.  This appropriation may or may not be justified, but no effort has been made to do so.  Past experience convinces me that this money will disappear into various government budgets with few tangible benefits.  This, most of all, is the steep price of getting this bill through the Democratic House.